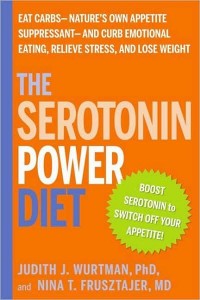 Recently, I was sent a copy of “The Serotonin Power Diet

” by Judith J. Wurtman and Nina T. Frusztajer for review.Â  I’ve been working on eating healthier and losing weight (who isn’t?) so I’ve been excited to check out various diet and health related books.Â  Unfortunately, the general theme has been that while the books provide great plans and helpful tips, they just aren’t ones that will fit with my lifestyle.

is not at all like that.Â  I was actually really thrilled when I got into the book – I read about 150 pages in one night, and took copious notes.Â  The plan is especially relevant to anyone who’s gained weight because of depression and/or medications for such conditions.Â  I have a naturally larger build and don’t display the healthiest tendencies, but I did gain a significant amount of weight when taking medications for a year or so.

To put it simply, the diet involves eating certain amounts of carbs at key times in order to stimulate serotonin product in the brain.Â  This both works to elevate moods and trigger a full feeling that will stop eating.Â  The portions are great, snacks are included, and you can eat a whole range of delicious food – no need to cut out your favorites entirely or lose a whole food group.Â  You won’t be missing out on much, so it’s an easier plan to stick to.

I haven’t actually started the The Serotonin Power Diet

yet, but I plan to.Â  I’m working on developing healthier eating and exercise habits before I start – that way it will be easier for me to stick to.Â  Below, I’ve included an article about the Serotonin Power Diet from the authors, so you can get some more “official” info!

“The long days of winter can cause depression, fatigue, increased appetite, decreased interest in work and social activities, and a significant need for more sleep. This cluster of symptoms is known as Seasonal Affective Disorder (SAD).

Whether you experience all these symptoms of SAD or just a general feeling of the winter blahs, don’t blame it on the holidays, after-holiday bills, cabin fever or endless ice storms. There is a physiological reason behind these seasonal changes: The activity of a brain chemical called serotonin seems to be altered during the seasons of the year when there are fewer hours of sunlight. And this decrease in serotonin activity seems to be behind the urge to crawl into bed at 4pm with a bag of cookies and the remote.

Antidepressants that activate serotonin have also been prescribed for SAD. They may relieve the mood symptoms but might leave behind an unwanted side effect: weight gain, which is one of the symptoms of SAD (making swimsuit season a dreadful time of year despite the return of long days of sunshine).

The better way to cope with SAD is to boost the brain chemical serotonin.

We all have serotonin in our brains, although women have less than men. When serotonin is functioning normally, it keeps us emotionally stable and also turns off our appetite so we eat less. The natural way of increasing serotonin activity is to get the brain to make more.

Boosting serotonin activity naturally may be the most practical and slimming option. There is a single way to make more serotonin: Eat sweet or starchy non-fruit carbohydrates at the right times during the day.

When carbohydrates that contain very little protein or fat (such as a potato without the sour cream or butter) are eaten, serotonin is made in the brain.

Insulin is involved in this process. As soon as the carbohydrate is eaten, changes occur in the blood driven by insulin secretion. The result is that an amino acid, tryptophan, enters the brain very quickly and, just as quickly, is converted to serotonin. One potato can lead to a better mood, more energy, less sleepiness and a controlled appetite.

Winter is long but the effects of eating a potato are short. There is one problem with this eating solution to the winter blues: The boost in serotonin probably doesn’t last more than 2-3 hours. Once the effect wears off, the blues may return. The answer is eating by the “sun clock.”

* Eat foods that will maintain your mental alertness such as protein, fruits, vegetables, and dairy products during the light hours (i.e. breakfast and lunch), and
* Switch to serotonin-producing carbohydrates when it becomes dark.

You will not overeat because the serotonin that is produced will switch off your appetite.”