You are here: Home / Celebrities / Celebrity Fashion / The History of the Chelsea Boot 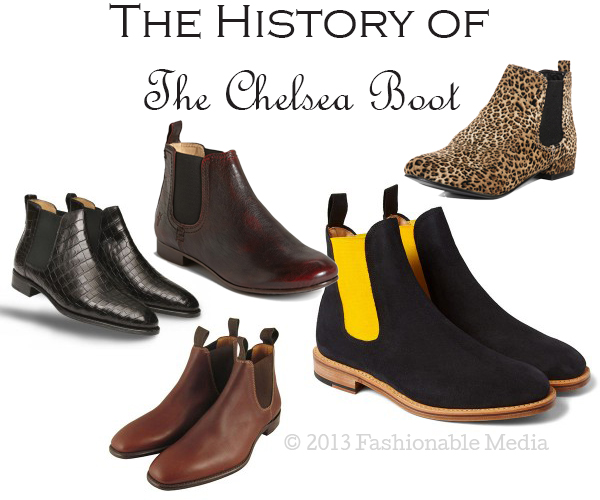 If you were to ask the person in street, someone like me for instance, when Chelsea boots first appeared on the fashion scene, then chances are she or he would reply â€˜The 1960sâ€™. Itâ€™s true that that swinging decade did see the first modern flourishing of this stylish, yet practical ankle boot which shares its name with that affluent part of London. However, the story of Chelsea boots goes back much further, back to the 1830s in fact and to one of the many great technical innovations of that time.

In 1837, the American inventor Charles Goodyear had developed something called vulcanised rubber. That doesnâ€™t sound like it would have much to do with fashion, but in fact the development of an elastic substance that wasnâ€™t sticky was what made the Chelsea boots possible. The most characteristic things about Chelsea boots are their elastic sides and you couldnâ€™t make the elastic sides until vulcanised rubber was available. Perhaps they should have been called Goodyear boots. In the same year, the eighteen year old Princess Victoria succeeded to the throne after the death of her uncle, King William IV.

Thanks to the development of this new type of rubber, a man named Sparkes-Hall, boot-maker to the young Queen Victoria, was able to produce the elastic gusset boot we now know as a Chelsea boot in 1837. The great advantage of the elastic gusset, another expression that you wouldnâ€™t normally expect to have anything to do with fashion, was that it made putting on and removing the boots quick and easy. This meant that the Chelsea boot was highly useful if you were going riding. The first elastic gusset boots were known as paddock boots or jodhpur boots and they remained a staple item of the wardrobe of the fashionable woman for the next seventy odd years. Likewise, working women across Britain were soon wearing versions of the Chelsea boots.

The great modern era of the Chelsea boot started in the early 1960s when Brian Epstein made his four young Liverpudlian musical protÃ©gÃ©es, namely John Lennon, Paul Mc Cartney, George Harrison and Ringo Starr, abandon their leather jackets and tight jeans. They were instead made to wear matching suits and, youâ€™ve guessed it, Chelsea boots. These boots were the perfect choice. They were easily smart enough to go with a suit, but they also had a certain Bohemian flavour to them. Chelsea boots fitted in perfectly with the affluent, swinging London scene of that time. Where the Beatles led, the rest of the fashionable world swiftly followed. No Dedicated Follower of Fashion could afford not to own a pair of the boots, which had by then acquired the name of the London borough that also had a football club, a bridge and a harbour.

Chelsea boots for women are back in fashion now, fifty odd years later. Indeed they are the go-to boot of choice for fashionable young people all over. They look like they are going to be around for a long time yet.